or send us an email.

What's new in the world of IT? Click below to get the latest news. 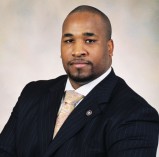 Calvin Mills Jr., Founder, CEO and President of CMC Technology Solutions LLC, formerly C&V Technologies of Louisiana, is not just another dynamic young man who rose from humble beginnings to make his mark. Certainly he fits comfortably into that mold as an award-winning entrepreneur in the highly competitive Information Technology arena. But his inspiring and instructive personal narrative chronicles so much more – a path of high achievement against the odds of low expectations; of opening doors of opportunity initially closed to him; of constantly challenging himself to go to the next level; and, most significantly, of uplifting others in his own quest to make a positive difference in his community, his state, the nation and ultimately, the global society.

Mills’ compelling journey began in New Orleans’ Third Ward, barely a mile from the Calliope housing projects  that later gained notoriety as the home of hip-hop mogul Master P. But his mother, a widowed schoolteacher, was determined that her son’s exposure would not be affected by the limitations of the neighborhood or her own resources. Through her efforts and “huge sacrifices,” as well as concerned mentors along the way, young Calvin learned to play soccer and golf; received musical training that uncovered his talent as a saxophonist, and attended a private Catholic school, De La Salle, on a work-study scholarship. With tenacity in his DNA, Mills recalls that he even talked his way onto the school’s football team, but was later told that he’d never make it to a college roster.

By the time Calvin Mills left New Orleans to attend Southern University in Baton Rouge, he was accustomed to being told what he couldn’t do. However, he knew what it took to turn those obstacles into opportunities and remained undaunted.  While academic goals had clearly brought him to Southern, the highly disciplined student athlete – who exhibited even then a consistent business-like demeanor in dress and attitude – was also on a mission to make the football team.  He succeeded in proving himself not only to the University’s coaching staff, but to his old high school coach and all who ever doubted him. In what would emerge as a pattern throughout his life, Mills outperformed and exceeded all expectations – going from walk-on player to starting fullback for the SU Jaguars by his senior year.

The lure of a professional football career was briefly heightened by a stint with the Tampa Bay Buccaneers. But it was Mills’ background as a Business and Computer Science major at Southern, from which he graduated in 2001, that set the course for his outstanding achievements off the field. He teamed up with another student, Valdez Gant, an electrical engineering major, with the ambitious dream of establishing a company that became “C&V Technologies,” which was derived from the letters of their first names. With  Mills’ assumption of sole proprietorship and operational responsibilities, a recent restructuring has resulted in the formation of The Calvin Mills Companies (CMC) and its constituents, including the newly renamed CMC Consulting Technologies; the EduTech Foundation, a philanthropic program to offer scholarships, as well as technology and entrepreneurial training, to disadvantaged youth from seventh to twelfth grades;  and CLIMB (Changing Lives is My Business), Mills’ motivational speaking arm.

The seed of the original C&V concept of providing affordable computers for lower-income families had been planted when Mills was working at several local electronic chain stores after college. He saw firsthand the frustration of potential customers who came to buy a system only to discover that even the most minimally equipped models were well beyond their financial reach. Mills also drew upon his own experience of having to purchase his first computer from a pawn shop for $200. Thus, he formulated a plan to build and sell affordable systems for those on the other side of the “digital divide” in access to information technology. He knew that they could not be denied the basic requirements for living and working in the 21st century information economy.

With his identification of a market largely ignored and untapped by major retailers and manufacturers, Mills endowed his “for-profit company with a nonprofit mission” of facilitating access to quality computers for lower-income consumers. Mills and his partner Valdez Gant directed their energies toward developing  a full-service  information technology firm offering a wide range of wholesale and retail products and services to individuals and businesses:  desktop and laptop computers, servers, hardware, wireless and wired LAN networking devices and installation, and computer-related education and training.  But the process of turning this dream into a functional reality meant coming to terms with details such as creating a business plan, getting financing and attracting a client base.

With guidance in the formative stages from LSU’s Small Business Development Center (which later cited C&V as Client of the Year) and an initial $1,000 networking job for a small company, the partners formally launched C&V Technologies of Louisiana LLC in 2003. Like most small businesses, however, the first few years of the company’s existence were an ongoing challenge in exercising the patience, focus and diligence Mills knew would be required to survive.

When Hurricanes Katrina and Rita struck in late summer 2005, everything changed for C&V, as well as the residents of New Orleans and South Louisiana, including Mills’ own family, who were affected by the devastation of the storms.  He had proactively researched the protocols for doing business with federal agencies and was prepared when the Louisiana Legislative Black Caucus contacted C&V to supply the hardware and software needed to set up a vital call center to track evacuees. In the following months, his small company won a $350,000 contract to supply FEMA and other agencies around the state with computer equipment and services. When the post-Katrina and Rita awards for C&V’s outstanding performance under pressure rolled in, triumph had emerged from tragedy.

With his forward-thinking professional approach, people-focused philosophy, and strong work ethic, Calvin Mills has propelled his company to the forefront of recognition by federal, state and local agencies. He has put his name and credibility behind the newly minted CMC Technology Consulting, as well as the other CMC entities, all of which are poised for even greater public and private sector success in the coming years.  (A list of Mills/C&V awards and media coverage is attached.)

For young men from the recovering neighborhoods of New Orleans – and disadvantaged communities throughout the state and nation – Calvin Mills’ message resonates strongly with that of our 44th U.S. President: Yes We Can – and We Will!